Hatchimals: Opportunity to Teach About Disappointment 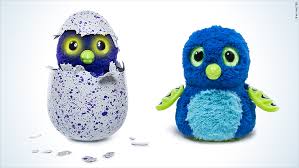 This morning a radio host asked me about Hatchimals. If you don’t know about this craze, it’s similar to the Cabbage Patch Doll craze, read this Huffington Post article before proceeding.

His first question was, “If kids act out when we say there are no more Hatchimals, should they be spanked or grounded?” My response, “I don’t believe in spanking. And I don’t believe in grounding little kids.”

Then he asked what I thought of “the ridiculous notion” [his words] of sending kids a letter from Santa explaining that the eggs are growing at the North Pole and will be delivered as soon as they are ready.

WHOA Rudolph. Let’s not miss the bigger picture here.
The Hatchimals are giving parents an opportunity, a teaching opportunity, let me explain.

This time of year is filled with so much excitement. I love watching the little ones, who are still using magical thinking, delight in all things magical. Regardless of all the fun, it’s still a parent’s job to address the way their child reacts to the gift giving process.

When you told your child that there won’t be a Hatchimal on Christmas morning, what was his/her reaction? Was there crying, whining, begging, rudeness, anger, tantrums, or was (s)he upset, but basically understood?

If your child was upset, yet accepted the news without having a hissy fit, that’s totally understandable and a really good outcome for such a young child!

But, what if your child wasn’t able to accept the fact that his desired gift won’t be arriving on Christmas morning? Should you do as the reporter asked, and punish him? Do you call her ungrateful? No, I think you ask yourself, what does my child need to learn here?

Look at underlying issue
Parents need to understand that very few kids under the age of 7 know how to express their big feelings. If they feel big feelings, they tend to express them in a big way. They need empathy and teaching, not punishment.

In adult terms, your child is learning how to deal with disappointment, and that’s a teaching opportunity like any other.

Kids under the age of 7 are still operating from the emotional side of their brain. The logical side of the brain is far from being fully mature.

Since children under the age of 7 have little regulation over their brain and emotions, the intensity they feel inside usually gets expressed in a similar way by using big and intense actions like whining, complaining, begging, or tantrums. Some kids may even have bouts of explosive anger to express their disappointment.

This is what you address, their inability to control themselves, their lack of understanding about how to express disappointment. This is a learned skill; one they haven’t mastered yet. They need to know that it’s okay to feel disappointed, but it’s not okay to stomp around, mope, be rude, mean, whine, beg, or tantrum about your disappointment.

If all you do is send a letter from Santa, and fail to address the reactionary behavior, I believe you’ve missed an opportunity to teach your child an important life skill.

Remember, your kids won’t always be with you. Sometimes they’ll be at school or at a friend’s house. And no parent wants their child to throw themselves on the floor when a friend’s parent says there is no more chocolate chip ice cream!

How much do I say?
Be as honest as you can. You might say, “I see that you’re disappointed. That’s a big feeling, and I know what that feels like. Feeling sad that something isn’t going to happen is okay. But yelling about it isn’t okay. I’m going to sit right beside you and wait for you to calm down, and then we can talk about what else we might do, and how to have big sad feelings without being mean, rude, demanding, or having a tantrum.”

What to do instead?
Maybe you offer to wrap a coupon for the Hatchimal so it’s there on Christmas morning. This simple solution teaches kids that there are ways to manage deep disappointment. The coupon idea also allows every family to frame this in whatever way they’re comfortable with. Maybe Santa sent the coupon, or you sent it, however your particular family celebrates the holiday.

What about being pestered?
Kids want everything they see for Christmas. And because you are the parent, you are the keeper of their dreams. Kids need a place to put their dreams, so they tell you, aka pester you, each time they find another thing they “have to have.”

So you don’t go insane, let them make as many lists as they want to over the next few weeks. This transfers the “keeper of the dreams” from you, to the list. Here’s the catch, and I’m being sneaky here. If they want to add a new item to the list, they need to rewrite the entire list. This does several things, teaches them to prioritize, has them practice their writing skills and fine motor control, and shows you, by the rewriting of the list, or making pictures, just how much they want the item.
This can also teach kids about deadlines. Let them know the final list is due on ______, so presents can arrive on time.

Check back next week when I post my yearly Santa article, co-written with a Huffington Post author. Her words are destined to become a classic way to explain who Santa is, and what he does and doesn’t do. I also expand to on the Santa concept showing you a bigger view of what Santa teaches kids!
Till then, go hug your kids,
Sharon

Join Waitlist We will inform you when the product arrives in stock. Please leave your valid email address below.